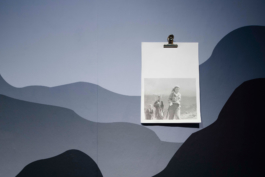 Installation of a panoramic billboard poster suggesting a mountainous landscape, the contours of which were drawn from a financial chart depicting economic growth in Southern European from 1870–2010. A clip mounted directly to the wall holds photographic research into various Greek resistance organisations active during the Axis Occupation of Greece in World War II.