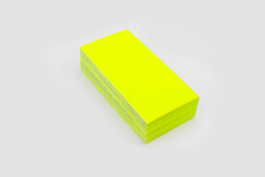 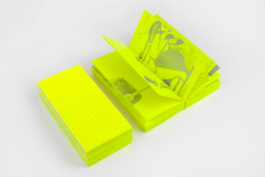 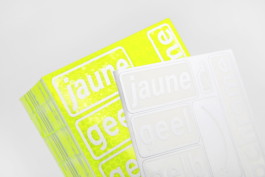 The artists’ book ‘jaune, geel, gelb, yellow. Monochrome’ was produced as a culmination of Pittas’ artistic engagement with the work of Theo van Doesburg. Initiated in January 2019 with a period of living and working at Van Doesburghuis in Paris, the studio/house designed by Theo van Doesburg for himself in 1929, Pittas arrived in Paris as protests by the yellow vest movement were taking place weekly. A continuous sequence of photographs taken from the artist’s phone track what he saw, taking readers into the temperature controlled depot where the original contents of Van Doesburghuis is stored, into scenes before, during and after yellow vest demonstrations and through sleepless nights spent staring at the studio ceiling.

The dialogue between the modernist ideals espoused by Theo van Doesburg and the current political backdrop of mass protest are highlighted in texts written by contributors from the fields of art history, architecture, philosophy, anthropology, sociology and poetry. The form of the book underlines these concerns and their multidisciplinary nature in its reference to the dimensions of a standard brick, as a material of architecture and protest. Likewise the cover, made of yellow ‘prismatic’ foil, alludes to state control (in its use in road signage) and the yellow vests re-appropriation of it as a protest material. The book’s interior expands this reference further, with its contents printed entirely in metallic silver.

‘Jaune (...)’ also includes documentation of the site specific installation and performance that the artist made at the conclusion of the residency, photographic stills of subsequent interactions with an archive of Van Doesburg’s work in Centraal Museum, Utrecht, a 3d animation in which Van Doesburg’s paintings collapse in on themselves, and a walkthrough the exhibition that followed at Centraal Museum in which the artist installed a scenography which superimposed a yellow vest demonstration, including protesters, police and their interactions, onto a selection of works by Theo Van Doesburg from the museum’s collection.